How can I prove that a driver caused my motorcycle crash? 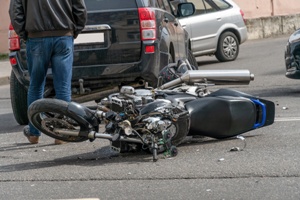 Motorcycle accidents where the driver walks away without injury can be devastating for a rider. Without the protection of airbags and steel roll cages, a sudden collision can severely injure a motorcyclist and cause months of expensive and painful recovery. In order to hold the driver accountable for his losses, a motorcyclist will have to provide concrete proof of the driver’s negligence.

In addition to collecting and preserving physical evidence after a motorcycle crash, you can help your crash case by detailing the other driver’s actions to your attorney. As you recover from your injuries, your legal team can examine statements made by the driver and witnesses, as well as look for other ways to prove that the driver was at fault.

For instance, an attorney can gather evidence against a driver who was:

Several Parties May Share Fault for a Motorcycle Crash

It is worth noting that it is not just the driver who can be liable for an accident. Your attorney should investigate all possible causes, including the condition of your bike, condition of your safety gear, and even the road you were traveling on to see if any other party made your injuries worse.

For example, if your helmet is cracked and you suffered a significant head injury, you could have a claim against the manufacturer. If your bike was recently repaired, the parts used or the mechanic’s work can be called into question. Finally, the location of the accident should be inspected for any potholes, debris, maintenance problems, missing guardrails, uneven grading, or other features that could have played a part in the crash.

If you were partially to blame for the crash, you can still recover compensation for your injuries. Tennessee’s modified comparative negligence system allows bikers to be up to 50% liable for their own injuries in an accident case, although the damages they receive are reduced by the percentage of fault. Our motorcycle accident attorneys can investigate the details of your accident and get you the maximum compensation you are owed under the law. Fill out our online contact form today to learn more, or request a free copy of our book, The 10 Worst Mistakes You Can Make With Your Tennessee Injury Case.