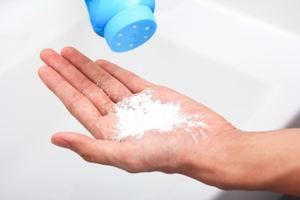 Many people use talcum powder every day. Its silky consistency and ability to absorb moisture has made it a preferred ingredient in deodorants and body powders for over fifty years. However, talc has recently made headlines due to the mineral’s potential to cause cancer, especially if it is used for prolonged periods—and some companies may have failed to warn consumers about the known risk.

Studies have shown that using talcum powder near the genitals can increase the risk of ovarian cancer in women. Just as inhaled talcum powder can increase the risk of lung cancer, talc particles that travel from the skin to the ovaries can become embedded in the reproductive tissues. It is especially difficult for the body to remove talc particles from the system, so these particles can cause inflammation and eventually form cancerous tumors.

Talc is used in many personal hygiene products, and is the primary ingredient in Johnson & Johnson’s Baby Powder. In addition for use on infants and children, Johnson & Johnson has advocated the use of baby powder as a natural deodorant and moisture preventative for women. Over 1,000 women have filed lawsuits against Johnson & Johnson after using baby powder for feminine hygiene, claiming that Johnson & Johnson was fully aware of the risk of ovarian cancer. In 2016, these cases were combined into one defective product lawsuit as a multidistrict litigation (MDL) against the company.

So far, these lawsuits against Johnson & Johnson have produced:

If you have been diagnosed with ovarian cancer after using talcum powder, we can help. Contact our office today to speak with attorney John L. Griffith about how to begin your claim. You can also download our FREE guide for personal injury cases in Tennessee to learn more about your right to compensation.