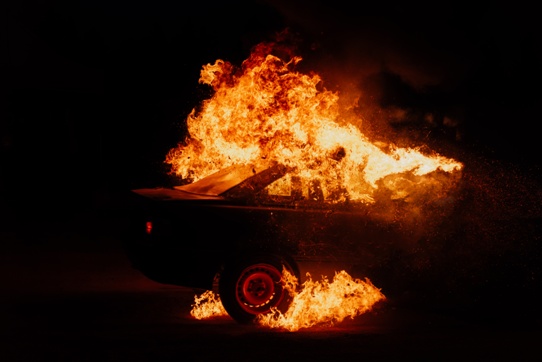 A car accident is already a traumatic experience, but some victims will suffer the ultimate nightmare of their vehicle catching fire after a crash. Occupants may survive the initial impact only to suffer serious burns, lung damage, or fatal injuries after a car's engine or gas tank catches fire.

If you've been hurt or if your loved one has been killed in a car fire, it is important to know why the fire occurred, who may be held liable for damages, and how to get rightful compensation for everything you have gone through.

Why Do Car Fires Happen After a Crash?

According to the National Fire Protection Association (NFPA), there were approximately 212,500 vehicle fires nationwide in 2018. These incidents caused at least 560 deaths and 1,500 injuries for passengers and drivers and cost nearly $2 billion in property damage. Collisions were most likely to result in fatal vehicle fires, and the most common factors in car fires and explosions were:

Thermal burns are some of the worst injuries a person can suffer. Depending on how long a person is exposed to the fire, they may experience first-, second-, third-, or fourth-degree burns. First- and second-degree burns may cause skin changes or scarring, and third-degree burns almost always require skin grafts.

Fourth-degree burns, however, are life-threatening. They affect both layers of the skin and underlying tissue and can even cause damage to the muscles and bones beneath. All nerve endings in the area are destroyed, and many tissues cannot be regenerated. Even if these burns aren't fatal, they might require amputation to prevent the dead tissue from infecting the rest of the body.

The injuries a victim can suffer in a car fire are often debilitating, causing an inability to walk or even move without pain. Scarring from skin grafts and surgeries may cause altered appearance, affecting a person's self-esteem and personal life. The physical and emotional effects of the crash can permanently prevent a victim from returning to work, all the while increasing the amount they spend on expensive medical treatments.

If you have been injured in this type of crash, you could be owed a wide variety of damages for your losses. You may be able to hold the at-fault driver, car manufacturer, or auto repair company responsible for past and future medical costs, loss of income and earning potential, and pain and suffering.

The wrongful death attorneys at GriffithLaw is waiting to listen to your story and explain your legal options to you free of charge. Simply fill out the short contact form on this page or give us a call at (615) 807-7900 to learn more.