How are police reports used in Tennessee injury claims?

Police reports are unreliable and fall under the category of speculation or hearsay. Since an officer does not physically witness the car accident or see the circumstances that led up to it, his report can’t be considered legitimate evidence of what actually occurred. Consequently, the state of Tennessee considers police reports inadmissible as evidence for proving liability in a car accident case. However, just because the police officer’s report is inadmissible, doesn’t mean the officer’s personal testimony can’t be used. 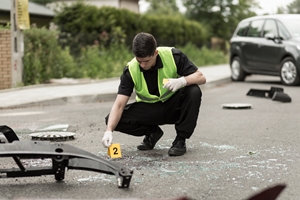 A police officer’s report can’t show the actions leading up to an accident or what occurred during the collision. However, an officer’s testimony of what he witnessed first-hand can bring necessary evidence to light on what occurred after the incident. This evidence is admissible and can be used to piece together what occurred and illustrate the severity of the wreck. Essential information that the responding officer can legitimately give includes:

Securing the Evidence You Need

When pursuing a car accident injury claim, you’ll need as much help as you can get to convince the insurance company and the court that your injuries require a fair settlement. At GriffithLaw, we’re here to give you the guidance you require to file your claim, and the resolve to secure your claim’s success. We know how frustrating and complicated car accident claims can be, especially when so many things can make or break your case. Let our experience and knowledge work for you. Contact us today at 615-807-7900 for a FREE consultation.

Need more information about traffic accident claims? Feel free to browse our site to see how our vast experience and knowledge can help you get the settlement you deserve.