Selfish Doctors: FOR ALL THE WRONG REASONS 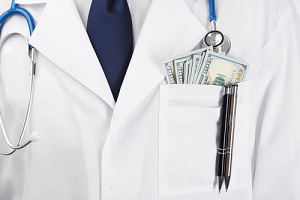 Yesterday morning I deposed a doctor, and I asked him "Doctor, why did you go to medical school?"   His answer? "Because I wanted to help people."  Is that true?  Well, actions speak louder than words.

This doctor then proceeded for the next hour and 45 minutes to defend an insurance company's lawyers position that my client's injury was all related to her old age of 59 years old, and had nothing to do with the negligence of their insured who gunned her down in a crosswalk with his car.  During the deposition I learned that this doctor has been providing depositions for insurance companies for over 10 years, and has NEVER EVER agreed with a plaintiff's treating doctor regarding causation.  He could not name one single doctor he has ever agreed with.   He agrees with the insurance lawyer's side 100% of the time.

Think about that.  If you choose your own doctor, who sees you and tries to help you for all the right reasons, then this guy is the guy who will defend the insurance company, charge them over $6,000 to write out an opinion letter that your doctor who treated you for all the right reasons was WRONG.  This insurance doctor then gives a deposition, collects his money, and suffers no consequences.  The only way he will ever be held accountable for his actions is if he is exposed for his true motivations so the jury will see it.

One of the ways to show their motivation is to follow the money.  This is difficult because they refuse to disclose their income they receive from doing these "IME's" or "Independent Medical Exams." This term is misleading, because there is absolutely NOTHING independent about it.  It is not a service requested by the judge, the plaintiff, or any of the plaintiff's treating doctors.  These guys can make well over $150K a year providing this "service" for insurance companies.  And the insurance companies use the same doctors over and over again because these doctors deliver what they need.  Are people influenced by who pays them and by how much they earn from a particular source?

Here is a separate example of one of the doctors I routinely see, Dr. Martin Wagner, regarding how some Defense doctors often mischaracterize their income from doing this type of work.  Listen to his own words:

Most people do not realize that doctors do this as a "side job."  Do you think that the doctors should have to disclose how much money they earn for doing this insurance company work, or do they have a right to privacy?   Does a jury have a right to know what percent of the doctor's income is produced by doing this type of side job work?  What about the doctor's hippocratic oath to do no harm?  Who is the doctor helping besides his own pocketbook, and the insurance defense lawyer?

I'll keep fighting the good fight, for all the right reasons.