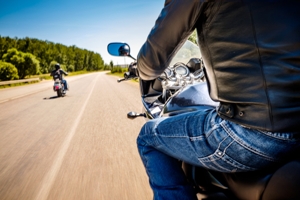 Motorcycles are a popular form of transportation in Tennessee. In fact, there are more than 160,000 registered motorcycles in the state, with more riders taking to the road every year. In addition to in-state bikes, thousands of out-of-state riders weave down our scenic roadways on their way across the country. Unfortunately, whether local or not, an increase of motorcycles on the road ultimately increases traffic risks.

You don’t have to be an avid rider to know that motorcyclists are at an increased risk of injury over drivers of cars and trucks. In the event of a collision, a motorcyclist is ten times more likely to be severely injured than a motorist. Furthermore, certain maneuvers that motorcyclists employ can increase the risk of a collision, which in turn, increases their own risk of injury. One of these risky maneuvers is known as lane splitting.

What Is Lane Splitting?

This maneuver, also referred to as "lane sharing" or "filtering," occurs when a motorcyclist rides next to traffic, between the designated lanes. Therefore, rather than pulling up behind a car, lane splitting allows bikers to pull over next to the car and use the median between the lanes as their personal motorcycle lane.

When performed intelligently and safely, lane splitting can help decrease traffic congestion and rear-end motorcycle collisions. However, when performed recklessly, this maneuver can cause confusion, road rage, and serious collision risks due to the proximity of the cars to the motorcycle, reduced maneuvering space, and the failure of drivers to expect a motorcyclist next to him.

Although the practice is common in many countries around the world, the United States isn’t as open to the idea of lane sharing.

In the U.S., California is the only state that permits lane splitting due to its large motorcycle population and overwhelming traffic back-ups. However, as more bikers take to the streets and traffic congestion increases across the nation, riders from all over the country are urging legislators to remove restrictions on lane splitting.

In 2015, a bill known as Tennessee House Bill 1102, was introduced to the Tennessee House of Representatives. This bill, if passed, would allow motorcyclists to operate between lanes of traffic when needed. The bill laid out reasons why lane splitting would be beneficial to the state’s road system by listing the following advantages, which were gathered by the American Motorcycle Association:

Unfortunately, before the bill could gain traction, and despite numerous pleas by local motorcyclists, the bill died before it made it to its first reading.

For more information on Tennessee motorcycle laws, safety, and personal injury, feel free to browse our extensive collection of articles and legal resources. To get started, click this link to learn more about Tennessee motorcycle, moped, and scooter laws.

If you are a motorcyclist who was injured by a careless driver in Tennessee, the experienced motorcycle accident attorneys at GriffithLaw are here to help. We stand up for motorcycle riders against unfair insurance adjusters and biased juries by presenting the biker’s side of the story. You can trust us to fully investigate your accident and to protect your rights in a settlement or a jury trial. Call us today for a free review of your case at (615) 807-7900.