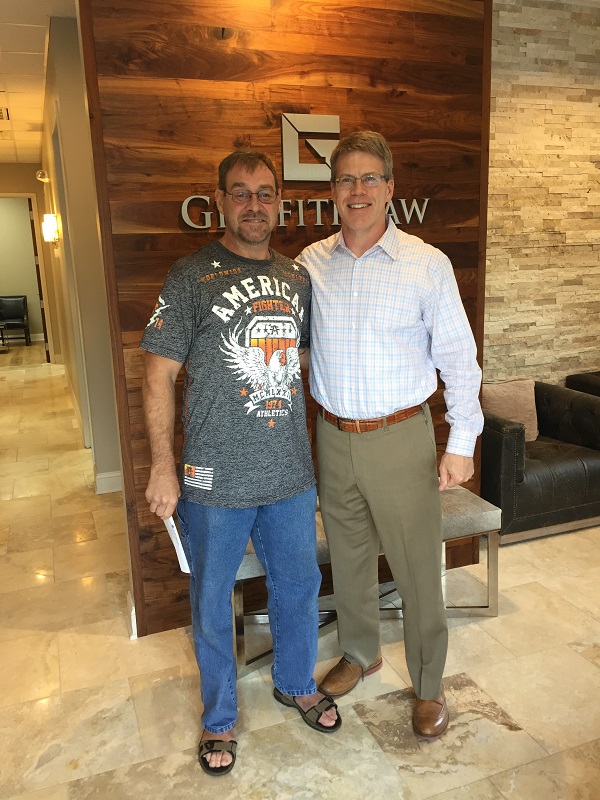 "I was in a head on crash and my neck was broken.   It was the most painful injury I have ever had, and that is saying something.  I don’t wish that on anyone.  I was not able to work at my job and my income stopped immediately.   I was in a halo (a large uncomfortable metal cage on my head screwed into my skull) that was as painful as my injury was.  I could not sleep in my bed, or even lay down for several months.  I have never had a situation where I could not take care of myself and was totally at the mercy of my caregivers.   I was talking to the other driver’s insurance company about what to do and it was clear that there was not going to be a good ending to my story without me getting some help.  I asked around of who a good lawyer was and I was referred to John.  I was told that he was an ace in court if needed, and was very honest, and did what he said he would do.  I was also told my case would likely settle if I hired him as he is known as a true litigator.   Every bit of that has turned out to be true.

I was able to get an excellent settlement shortly before trial.  John pushed my case and told me exactly what the insurance companies would do and how they would treat me, and all the questions they would (and did) ask me.   He also met my doctor who said he was impressed by John’s ways and knowledge.

After receiving the settlement, I was told I cannot tell anyone how much it was, which I don’t care for anyway as it is my business.  I was able to pay all of my medical bills, and pay off my home, and I do what I still can do, part time now.  I wish I never was in this wreck and pray that none of you have to go through what I have paid for with my health and my life.  I still hurt, and I will forever until I die.  But I know that it would have been worse and I would be in not as good as shape financially if I wasn’t able to get John on my side.  I felt like I had a fighter that was there for me above all else, even above himself.  He and I are friends, I consider him a friend, and I would do anything for him.  He gave his all for me, and I saw him give it, and I would do the same for him.

If you ever need a lawyer who is true blue and won’t stab you in the back, and who will truly beat the shit out of the other lawyers if they are rude to you, then John is your man.  He came down on the other side like a hurricane after they tried to pull some tricks.  It was fun to watch.

Keep after them John… Don’t ever slow down.

Thank you for helping me!"