If you need help, you can call our Nashville law office today at (615) 807-7900 to schedule a free case review, or you can contact us online for a prompt response to your concerns.
Pay Nothing Unless We Win Your Case! 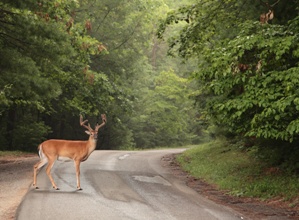 Tennessee is known for its beautiful wildlife and unspoiled nature, but these things do not always exist peacefully with their neighbors—especially those in cars. From rabbits and squirrels to free-roaming livestock, a collision with an animal can cause physical and emotional injuries that may take years to heal. Our attorneys explore who may be at fault for a collision with an animal, as well as how to collect compensation to cover injuries and vehicle repairs after this kind of crash.

Thousands of drivers and passengers are injured every year as a result of a collision with an animal, and many more are hurt as a result of swerving away to avoid a crash. While it is impossible to hold an animal responsible for the costs of a crash, drivers may be able to collect compensation from the animal’s owner or through their own insurance coverage.

There could be a variety of parties responsible for covering your injury costs, depending on whether the accident involved:

The injury attorneys at GriffithLaw are familiar with the complexities of car accidents involving wild and domesticated animals. We thoroughly investigate all factors leading up to and after the crash, and determine all potential sources of compensation for victims. We also deal with insurance companies on our clients’ behalf, ensuring that any settlement offered will cover the costs of injuries and losses now and in the future.

Not only do our car accident lawyers provide initial consultations free of charge, we do not collect any legal fees until your case is resolved. To learn more about your rights, simply fill out the short contact form on this page or request a free copy of our book, The 10 Worst Mistakes You Can Make With Your Tennessee Injury Case.