The Most Common Kinds of Distracted Driving in Tennessee 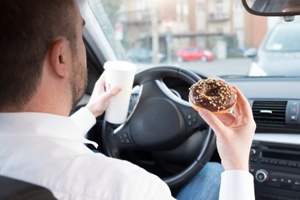 Nearly every driver has engaged in some form of distracted driving at one time or another. A quick text response, turning around to speak to a passenger—any action that takes focus off the wheel has the potential to cause severe injuries. Distracted driving causes thousands of deaths and hundreds of thousands of accidents every year, and the risk of these crashes is especially high in Tennessee.

“Distracted driving” is often used as a synonym for using a cellphone behind the wheel. However, the truth is that a driver can be considered distracted if he or she is engaging in any non-driving activity. Visual distractions take the driver’s eyes off the road, manual distractions require a driver’s hands to leave the wheel, and cognitive distractions pull a driver’s focus away from driving.

The most deadly non-driving activities involve more than one form of distraction, and may include:

How Can I Tell If a Distracted Driver Caused My Car Accident?

As many as 14% of all reported motor vehicle accidents in 2015 were categorized as distraction-related crashes, a number that has been steadily increasing. If you have been injured in a car accident, we can investigate a driver’s cellphone records, common driving activities, and other potential evidence to rule out distracted driving, getting you the compensation you need for your injury costs, loss of income, property damage, and pain and suffering. Fill out the quick contact form on this page to have the attorneys at GriffithLaw explain your rights in your free case evaluation, or order a free copy of our book, The 10 Worst Mistakes You Can Make With Your Tennessee Injury Case.