What Tennessee Laws Say About Using Your Cellphone While Driving 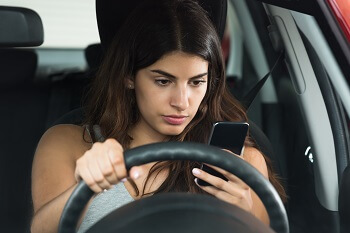 Distracted driving is a common hazard on roads nationwide, but Tennessee drivers are at particular risk of being injured in these kinds of crashes. A recent study identified Tennessee as having the highest rate of distracted driving deaths in the nation, suffering nearly five times the national average of collisions due to distraction. In 2018, Tennessee saw an average of sixty-seven distraction-related crashes every single day, many of them due to the use of electronic devices.

The biggest threat to driver and passenger safety is sending text messages, but talking on the phone, recording video, and surfing the internet are all deadly forms of distraction. Although talking on a cell phone while driving is legal in Tennessee, the state has strict laws to ensure the use of electronic devices takes a backseat to road safety.

The ability to stay in constant contact with friends and access the internet from a mobile device can easily pull a driver’s attention from the road—and in the two seconds it takes to send a text, a driver can cause a crash that results in life-altering or fatal injuries. The sad truth is that the vast majority of distracted driving accidents could have been prevented if drivers had waited to send their texts or emails until after they parked their vehicles.

In order to prevent crashes caused by electronic distractions, Tennessee has enacted several laws regulating cell phone use while driving, including:

Texting while driving is considered a “primary” offense in Tennessee, meaning law enforcement officers can pull you over without having to witness any other violation if they see you texting. In addition, the Department of Safety and Homeland Security has stated that the District Attorney’s Office has the authority to check phone records if distracted driving is suspected after a serious injury or fatal crash.

If you were hurt in an auto accident caused by a driver who was texting while driving, you may be eligible to receive financial compensation. Our lawyers serve injury clients on a contingent fee basis, meaning we do not collect anything unless we secure a recovery for you. To set up a free initial consultation, simply fill out the short contact form on this page. For more information, you can also request a free copy of our book, The 10 Worst Mistakes You Can Make With Your Tennessee Injury Case.