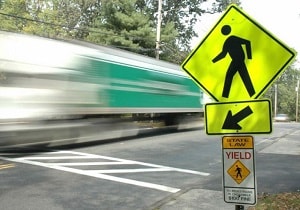 As the population continues growing across the state, so does the number of cyclists, pedestrians, and vehicles on Tennessee roadways. Crosswalks, paved roads, sidewalks and shoulders of roads have an increasing amount of traffic every year. All too often, motorists are in a hurry and often not watching for cyclists or pedestrians. Cyclists or pedestrians too may become inattentive. As a result, the number of bicycle and pedestrian accidents continues rising. According to the Tennessee Traffic and Safety Commission, in 2012 there were 259 cyclists injured and 4 killed in the state. Pedestrian accidents were even higher with 1,044 injuries and 44 fatalities recorded.

Injuries suffered by child pedestrians from the age of 14 and under remains the third leading cause of accidental death in the country. Male children aged 5 to 9 are especially vulnerable. Younger children are often struck by vehicles within close proximity to home. These impact collisions often cause brain tissue trauma, serious spinal cord injuries or death. Having little or no sense of impending danger, youngsters are commonly impulsive and do not stop to assess a potentially dangerous situation. Without the experience and judgment skills possessed by older children and adults, little ones also cannot discern the speed of approaching vehicles.

While many children have been taught to look both ways before entering a roadway, due to a young child’s mental stage of development, small children do not comprehend that often times, looking once is insufficient. Home and school educational programs must emphasize the need to continually be on the lookout for possible roadway hazards.

Problems with Sunrises and Sunsets

Even when acting cautiously and responsibly, a driver’s visibility is greatly reduced from the glare of the rising or setting sun. Under these circumstances, motorists have difficulty viewing the roadway in front of the vehicle. According to the National Highway Traffic Safety Administration, 25% of pedestrian fatalities occur between the hours of 4 p.m. and 8 p.m. Between the hours of 4 a.m. and 8 a.m., 13% of fatalities occur. Contact our Nashville pedestrian accident lawyers if you have questions about an accident that has taken place or to schedule a free consultation to speak in person.

Accidents involving cyclists of any age and a motor vehicle are often devastating. The vast difference in size and weight generally means the cyclist suffers serious or fatal injuries when a collision occurs. Too often motorists may attempt to pass a cyclist, which causes sideswiping accidents. Some drivers compound the fault by failing to stop and offer assistance. This act not only demonstrates a lack of human compassion but is also illegal. Some of the many types of bicycle/vehicle collisions include:

Other accidents that cyclists may endure involve the drainage grates commonly seen along the side of roadways. Older styled grates have openings that run parallel to the road. Cyclists might easily catapult from a bicycle if a front wheel falls into one of these openings. In the event that this type of accident occurs, the individual may have a claim against the city or county in which the accident took place. According to the Tennessee Court of Appeals, the state is liable for injuries resulting from this type of mishap. The cycling accident lawyers at GriffithLaw are ready to speak with you if you have been injured in Tennessee on your bike. Contact 615-807-7900 to set up a free consultation.