Playgrounds are supposed to be safe places where children can get exercise, breathe fresh air, and make new friends. However, playgrounds are one of the most common locations for children to suffer serious accidents. According to the Centers for Disease Control and Prevention (CDC), hospital emergency rooms treat more than 200,000 children under the age of fourteen each year as a result of playground-related injuries, many of which have fatal consequences.

How Children Are Hurt on Tennessee Playgrounds 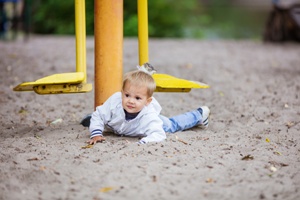 The most common cause of injuries in parks and on playgrounds is a severe fall. Over 75% of injuries involve children falling from play structures, monkey bars, ladders, rock walls, steps, or other climbing equipment. Children may slip on a wet surface, lose their grip, or lose their balance, causing them to tumble to the ground and potentially strike other objects on the way down. While falls are the most common method of injury, they are by no means the only hazard for children at play. Playground accident can cause a wide variety of injuries, including:

Who Can Be Held Liable for a Playground Accident?

There are many remedies available for children who have been injured due to someone else’s negligence. Your injury lawsuit will begin by identifying who could (and should) have prevented your child’s injury, as well as totaling the amount of damages you are owed for your child’s medical bills, rehabilitation, emotional trauma, disfigurement, future lost income, and other family losses. Several parties may be responsible for your child’s injury, particularly if the incident was caused by:

If your child was injured on a playground, you should speak with an attorney immediately. Our injury lawyers can gather evidence on your behalf and advise you on your next steps at no cost to you, and we do not collect any payment from you until we secure a recovery. Simply fill out the short contact form on this page to set up a free initial consultation.