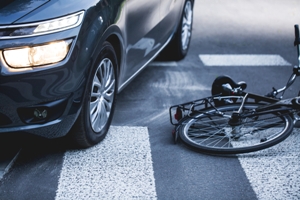 Bicycle riding is a healthy way for adults to stay fit, relieve stress, and even avoid high gas prices on daily commutes. Unfortunately, there are many dangers threatening bikers of all ages as they ride on wooded trails and busy city streets. In this article, we explore the most likely injuries in bike accidents and help riders assess their risks to help them stay safe on the road.

The Most Common Bicycle Accident Injuries Involve the Head, Face, and Chest

According to the National Highway Traffic Safety Administration, bicycle accidents involving cars are most likely to cause injuries and death. In 2015, 818 bicyclists died and many more were injured after collisions with motor vehicles. In addition, most researchers agree that bike crash injury numbers are much higher, as only a small fraction of bicycle crashes are reported to police.

Statistics show that cyclists are most likely to suffer:

One of the best things about accident data is that it allows bikers to know when and why they are most at risk of a crash. While some factors may be unavoidable, changing the route or the time of day you set out for a ride can greatly reduce the risk of severe injuries.

The most common risk factors in bike crashes include:

The easiest things bicyclists can do to protect themselves from injuries is to wear helmets and high-visibility clothing. Always make sure your bike is perfectly fitted to your height, that your bike is clean and working well, and that you make sure you are seen at all times on the road. If you were riding your bicycle and were struck by a car, we can help you take action. Contact us today to schedule a free, no-obligation consultation.