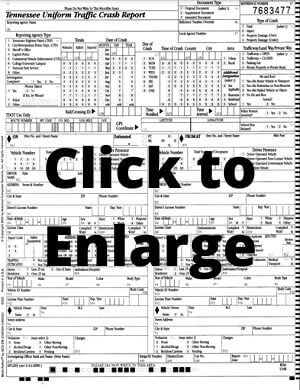 Before you suffered a crash, you may have thought that a car accident report was a written account of the details of a road accident. Now that you have a copy of your report in front of you, you can see that the actual form used by police is much more complicated than a simple summary of the wreck. Our experienced car accident lawyers are here to explain the critical details in the Tennessee Uniform Traffic Crash Report and help you get the compensation you deserve.

How to Read Your Tennessee Uniform Traffic Crash Report

The standard car accident form used by local police and the Tennessee Highway Patrol is called the Tennessee Uniform Traffic Crash Report. It is divided into a series of columns and boxes to collect the crucial details of the accident. Some of these details are facts (such as names and addresses), while others are the opinion or impression of the officer at the scene (such as the likely cause of the crash).

As the victim in a car accident case, you should pay particular attention to the boxes marked:

If you or a loved one suffered a serious car accident, GriffithLaw is here to help. We can discuss your next steps in your free injury consultation, and we do not collect anything unless we secure a recovery for you. To learn more about your claim, please call (615) 807-7900 today or download a free copy of our book, The 10 Worst Mistakes You Can Make With Your Tennessee Injury Case.