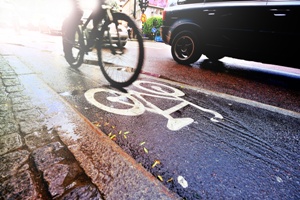 If you ask bicyclists and drivers who causes the most accidents, you’ll probably get two different answers. Bikers lament the angry drivers who veer into bike lanes or turn in front of them, while drivers often see cyclists as risk-takers who can dart in front of their car at any moment. However, it is the cyclists who are most likely to sustain serious injury in a crash, giving drivers an increased duty of care when traveling near them.

All injury cases are based on negligence and the “duty of care” standard. Proving negligence involves identifying who owed whom a greater duty of care, which person breached the duty of care, and what effects that breach caused. Simply put, if a victim is injured because a person was not being reasonably careful or acting as an average person would in a similar situation, the victim can hold the person responsible for any losses suffered.

Some common negligent actions of drivers include:

Drivers and Bikers May Share Fault for a Bicycle Crash

In Tennessee, it is possible for bicyclists to collect compensation even if they were partially to blame for a crash. For example, a biker may have failed to signal a turn or been riding at night without a front light and rear deflector. In these cases, the amount of damages awarded will be based on the victim’s portion of fault. Under Tennessee’s modified comparative negligence system, a bicyclist who is more than 50% at fault for the crash is not owed any damages through an injury claim. If the bicyclist is less than 50% at fault, the amount awarded will be reduced by the percentage of fault.

If you have been injured in a bike accident, we can help you collect evidence of your injury costs, loss of income, property damage, and pain and suffering. Fill out the quick contact form on this page to have the attorneys at GriffithLaw explain your rights in your free case evaluation, or order a free copy of our book, The 10 Worst Mistakes You Can Make With Your Tennessee Injury Case.