Auto Insurance May Not Cover a Collision With a Fixed Object 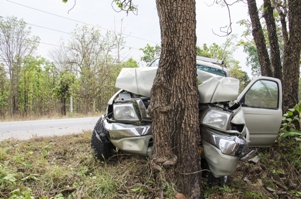 Most car accidents involve two vehicles colliding with each other, but many people are injured every year in single-vehicle crashes—many of which prove fatal. According to studies from the Insurance Institute for Highway Safety (IIHS), about 20% of all car accident deaths result from vehicles leaving the roadway and striking a fixed object such as a tree, utility pole, road sign, or traffic barrier. While drivers are often blamed for causing these accidents, the truth is that many others could be responsible for the crash.

Parties Who May Be Liable in a Single-Vehicle Crash

While Tennessee law requires a minimum level of vehicle insurance, most liability insurance does not cover single-vehicle accidents. If your auto policy does not include collision coverage, you may have to pay out of pocket for damages in a fixed-object crash. Since these crashes can cause thousands of dollars in property damage and medical bills, it is always worth investigating whether someone else’s negligence could have played a role in the accident.

For instance, you may be able to collect compensation if your accident was caused by:

Victims are often not aware that a third party could have caused their accident, since many contributing factors in a crash are not readily apparent. If you were hurt in an auto accident that was not your fault, our injury lawyers can perform a full investigation to determine liability, and we do not collect anything unless we secure compensation for you. To set up a free initial consultation, simply fill out the short contact form on this page. For more information, you can also request a free copy of our book, The 10 Worst Mistakes You Can Make With Your Tennessee Injury Case.