Bicyclists May Have Trouble Getting Payment for Dooring Accident Injuries 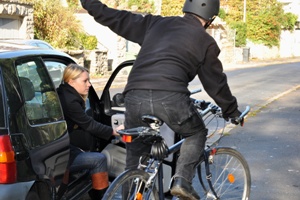 Cyclists can suffer traumatic injuries at the slightest action of a nearby driver—in fact, a driver can cause an accident even while the car is parked. The action of opening a car door without checking for oncoming bicycle traffic causes hundreds of “dooring” collisions every year, many of which are fatal for the cyclist.

It may seem as if bicyclists would have an easy time collecting payment for these accidents, since they would not have been injured if the motorist had not opened the door in front of them. However, it is often difficult for victims to get adequate compensation due to:

If you have been injured in a bicycle accident, we can help you get the payment you deserve for your injuries, lost income, property damage, and pain and suffering. Fill out the quick contact form on this page to have the attorneys at GriffithLaw explain your rights in your free case evaluation, or order a free copy of our book, The 10 Worst Mistakes You Can Make With Your Tennessee Injury Case.