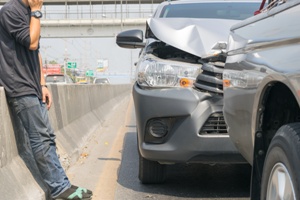 Rear-end collisions are the most common kinds of car accidents in Tennessee. Although they are also known as “fender benders,” rear-end accidents can cause a significant amount of damage as one car barrels into the back of another. Even at speeds under 10mph, when a car is struck from behind, the driver and passengers can suffer neck and soft tissue injuries—some of which may not show symptoms until hours or days after the crash.

It is vital for injury victims to seek medical attention as quickly as possible after an accident occurs. Many victims simply want to go home, allowing the adrenaline to override any pain symptoms so that they can get away from the accident scene. However, injuries sustained from a rear-end collision may not be immediately apparent, and can be harder to treat weeks after the event.

The most common injuries reported after rear-end accidents include:

Rear-End Car Accidents Can Be Deadly to Bikers

When a rear-end accident occurs between two cars, the person in the rear car is usually found to be at fault. However, Tennessee’s comparative negligence laws may make it more difficult for the injured victims who were rear-ended to get compensation, since they could potentially receive less in a settlement if they shared blame for the accident.

It is important to note that rear-end collisions are particularly dangerous when they involve bicycles or motorcycles. When a car hits the back of a bike, the rider is not simply jolted forward, but flipped or thrown from the bike. Both motorcyclists and bicyclists have very little protection when they are hit on the back wheel, and are more likely to suffer permanent or even fatal injuries as a result.

Even a so-called “minor” accident can cost a victim thousands of dollars in hospital bills, physical rehabilitation, and ongoing medical appointments. During this time, victims are often unable to work, making it even more difficult for victims and their families to recover and put the accident behind them.

If you have suffered significant losses as a result of a collision, our Tennessee attorneys can help you get the compensation you deserve. Fill out our online contact form today to schedule a free, no-obligation consultation with our legal team.