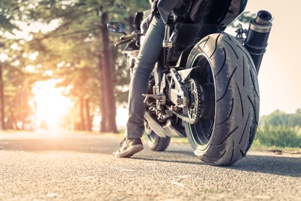 Although motorcycle accidents are a constant worry for both riders and drivers, the rider is much more likely to suffer serious injury or death in a crash. According to the National Highway Traffic Safety Administration (NHTSA)'s Traffic Safety Facts for Motercycles, motorcyclists are over five times more likely to be injured—and 25 times more likely to be killed—than drivers and passengers in cars. Even when a motorcyclist survives an accident, injury treatment can last for years or even result in permanent disability.

Causes and Complications of Motorcycle Accidents

While traffic collisions are commonly called “accidents,” the truth is that most crashes are caused by some form of negligence. Often motorcyclists are unfairly blamed for causing a crash even if they were riding safely and obeying the law. In fact, the majority of motorcycle accident injuries are not caused by the rider, including those involving:

If you have been injured in a motorcycle crash, we can help you get proper compensation for your medical bills, loss of income, damage to your bike, and pain and suffering. Fill out the quick contact form on this page to have the attorneys at GriffithLaw explain your rights in your free case evaluation, or order a free copy of our book, The 10 Worst Mistakes You Can Make With Your Tennessee Injury Case.