Wrong-Way Crashes Are Likely to Cause Severe Injuries 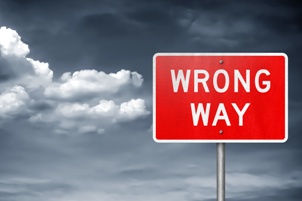 Every day, drivers trust each other to follow the rules of the road in order to prevent injuries. Not only are they relying on others to drive while calm and sober, but they also presume that all drivers are properly trained and familiar with the roadways on which they travel. Unfortunately, a simple wrong turn can have devastating consequences—especially if that turn places a driver directly in the path of oncoming traffic.

Why Do Wrong-Way Accidents Keep Happening?

Wrong-way accidents occur when a driver accidentally steers the vehicle into the opposite direction of travel, colliding with cars traveling in the correct direction. These accidents are most likely to occur as a driver enters a freeway using the exit ramp, but they can also occur at low speeds on city streets. Driver error is the most frequent cause of wrong-way crashes, but vehicle malfunction or poor roadway design can also contribute to these accidents.

Drivers most commonly cause wrong-way accidents due to:

According to the NTSB, wrong-way crashes are many times more likely to be fatal than other types of car accidents, with death occurring in one out every five wrong-way accidents. This is because two vehicles barreling toward each other usually results in a head-on crash, which is likely to be fatal at highway speeds.

Even if victims survive these crashes, the injuries they sustain often require expensive surgery and hospitalization, long-term physical and emotional rehabilitation, and carry lifelong complications that make independent living difficult or impossible.

If you've been injured in a serious car wreck, our attorneys can investigate the details of the case to determine who may be held responsible. Our lawyers provide injury clients with a free initial consultation and represent their interests on a contingency fee basis, meaning we do not collect anything unless we secure a recovery for you. To learn more about your claim, download a free copy of our book, The 10 Worst Mistakes You Can Make With Your Tennessee Injury Case.