Bicyclists Are Often Struck While Waiting at Stop Signs 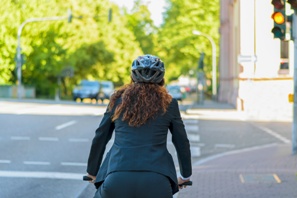 Bicyclists who are cautious when traveling next to speeding cars may not realize the dangers of being hit while standing still. A biker who is waiting for her turn at a stop sign may be struck without warning, forcing her off the road—or into oncoming traffic. Our attorneys take a look at the most common ways these accidents occur, helping bicyclists identify who could be at fault for a crash.

Bicyclists Are at Risk of Severe Injury in Stop Sign Accidents

The majority of bicycle accident injuries are caused by cars. However, that does not mean that the driver is the only person that can be held liable for the cost of a biker’s injury. Many different parties can be liable for a bike accident at a stop sign, including the cyclist himself, and it may take some careful investigation to determine who can be held responsible for negligence.

The most common reasons cars collide with bicyclists at stop signs include:

It is important to remember that cyclists can still file an injury lawsuit if they are partially to blame for an accident. In Tennessee, a victim who is less than 50% responsible for an injury is entitled to recover damages. However, the damages the victim receives will be reduced by his or her percentage of fault. The more losses a cyclist sustains, the more the percentage of blame becomes a crucial factor in his recovery.

At GriffithLaw, we have seen firsthand the harm that bike-car collisions can cause. In order to ensure that injury victims can get their questions answered, we provide injury consultations at no cost. We also work on a contingency-fee basis, so our legal fees are paid with a portion of the settlement we secure for you. To learn more about your rights, simply fill out the short contact form on this page or request a free copy of our book, The 10 Worst Mistakes You Can Make With Your Tennessee Injury Case.