Who is at fault if a senior is struck while crossing the street? 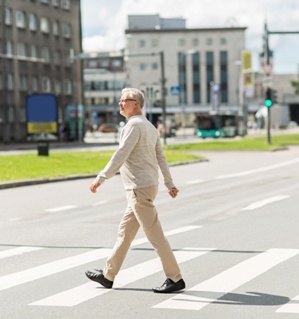 Why Are Older People More at Risk of Pedestrian Injuries?

By far, the biggest cause of pedestrian accidents for people of all ages is inattentive drivers. Careless driving can include activities such as disregarding stop lines, turning in front of pedestrians who have the right of way, and running red lights. Accident rates increase even further if a driver is distracted by a cellphone or is driving under the influence of drugs or alcohol. According to the Centers for Disease Control and Prevention, 48% of crashes that resulted in pedestrian deaths in 2015 involved alcohol use by the driver or the pedestrian.

In addition to all of the usual reasons for Tennessee pedestrian accidents, senior citizens face specific difficulties that place them more at risk of being struck by cars, including:

Who Is Responsible for a Pedestrian Crash With a Senior Citizen in Tennessee?

In many cases, both a driver and a pedestrian will share some portion of fault for an accident. Under Tennessee’s modified comparative negligence laws, a victim may be determined to be up to 50 percent liable for a crash and still receive damages from the other party. However, the amount a victim can receive will be reduced by the percentage of liability for the accident. For example, if you are awarded $100,000 but are 30 percent at fault, you will only receive $70,000 in damages.

If you have been injured in a pedestrian accident, we can help you get the payment you deserve for your injuries, lost income, property damage, and pain and suffering. Fill out the quick contact form on this page to have the attorneys at GriffithLaw explain your rights in your free case evaluation, or order a free copy of our book, The 10 Worst Mistakes You Can Make With Your Tennessee Injury Case.