What are the most common kinds of injuries in dog attacks? 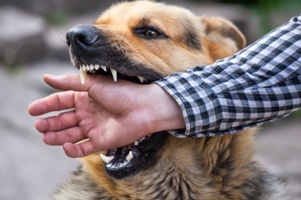 Dog attacks can cause a wide range of injuries, and result in hundreds of thousands of emergency room visits every year. Due to the potential for serious infections or complications that occur as a result of the attack, injuries from dog bite incidents should always be taken very seriously, even if they seem minor at first.

According to a recent report from the Centers for Disease Control and Prevention (CDC), an estimated 368,245 people were treated in U.S. hospital emergency rooms for dog attack injuries in 2001, the majority of whom were children between the ages 5 and 9 years old.

A child may not recognize the dangers of approaching strange dogs, and when they get close to a dog they are typically standing face-to-face. In addition, children often weigh less than some large-breed dogs, and will not be able to outrun the dog who chases after them. As a result, it is often children who suffer:

Victims often rely on their own medical insurance to pay for the costs of treatment after a dog attack. This may be sufficient to cover minor injuries, but the costs of medication, surgery, and physical therapy can quickly add up. If the victim suffered a prolonged attack or was particularly traumatized by the incident, therapy may be added to the costs of care, bringing the total to tens of thousands of dollars.

If a dog owner did not take proper precautions to protect innocent people from harm, the owner can be held liable for any injuries the dog causes. The Nashville dog bite lawyers at GriffithLaw can help you get the compensation you deserve for medical bills and lost income. Contact our skilled legal team today to begin your free case evaluation, or read through our book, The 10 Worst Mistakes You Can Make With Your Tennessee Injury Case.