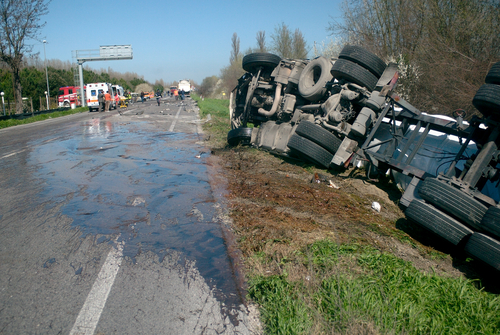 Help is here!   At least that is what the truck drivers hope to believe in the newly published rules by the Federal Motor Carrier Safety Administration (FMCSA).   The new rule, which went into effect on January 29, 2016, will prohibit carriers, shippers and brokers from coercing truck drivers to violate hours-of-service and other safety regulations.

“For years, truck drivers have been the front men for the coercive tactics of the trucking companies, the shippers, and their brokers.  They take the beatings for their bosses” says John Griffith, an attorney that has handled catastrophic injuries to civilians injured by truck drivers, who are “overworked, and blackmailed to continue driving when they know they should stop.”

Before this rule, a trucking broker could set such a tight schedule for delivery of goods that could not possibly be met under the current safety guidelines, unless those safety laws and driver hour regulations were broken.   Typically, if the driving hours of service was exceeded by a fatigued trucker trying to make the deadline set by the broker, the driver was the only person held responsible.  Now, the FMCSA has authority to intervene and issue fines to the shipper and broker, as well as to the carrier who dispatched the driver.

“This rule is long overdue.  These drivers will drive over their allotted safe hours, drive on unsafe tires, drive with broken and unsafe rigs, all for the benefit of the carriers, brokers and shippers.  They are told simply that they better get their job done, or else….” says Griffith.  Griffith also says that he sees subtle indirect threats of coercion that entices the truck drivers to break the safety rules, by obscurely threatening them with unfavorable loads, denial of loads, reduced payment, and loss of their job.

“The drivers aren’t told directly they are going to get punished by their managers for not pushing safety to the limits, but they are by receiving the bad loads, and they know what they have to do to get the better loads.”

FMCSA Transportation Secretary Anthony Foxx stated upon release of the new Rules that “No commercial driver should ever feel compelled to bypass important federal safety regulations and potentially endanger the lives of all travelers on the road.”

The new rule took effect on January 29, 2016.   Attorney John Griffith says, “If you are a driver and you believe that you are being forced to violate the FMSCA safety regulations, the new rules require you to do the following:

Violators can be fined $16,500 per event and have their authority to operate revoked.

“I am interested in seeing how the new rules will be reinforced” says John Griffith.  “While I often sue the drivers on behalf of the families they hurt and kill on the roadways, I have discovered over the years that many times they are the pawns to the brokers and shippers who are truly the ones responsible for coercing their drivers into bad, unsafe behavior.”