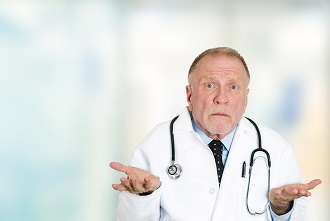 It all started about 10 years ago…  There must have been some big insurance lawyer seminar where they handed out a script for defense lawyers to follow called, “And that’s a good thing.” It was about that time that my fellow trial lawyers and I noted a tactic that seemed silly, but they must believe it is effective.

Here’s what the insurance lawyer will do. During a deposition of the treating doctor, the insurance defense lawyer on cross-examination will review the history and physical doctor notes, and go painstakingly through every detail. The lawyer will try and be clever, however, as they will only pick out the tests, body parts, diagnostic studies and any comments that are helpful to their goals and the issues that have absolutely nothing to do with the injured body part hurt in the wreck. They will ask the most mundane questions about unrelated tests and body parts that were unaffected by the trauma to your patient. They’ll ask you if a test is negative, and follow up with the statement, “And that’s a good thing, isn’t it doctor?”

A) Ask about body part/test that is totally unrelated to the reason the person came to seek your help;

B) Ask about if that body part/test was totally normal, or if the test was negative;

The typical example is if someone comes into your office with a knee joint issue, for example, the defense lawyer will ask as follows:

Q: Doctor, in your initial examination, I see you performed a grip strength test?

Q: And how did Ms. Jones perform on that?

Q:  And I see that her neck had a full range of motion as well?

What does a grip strength test and a full range of motion on the neck have to do with the knee joint?

On soft tissue cases, the defense lawyers get a bit more slick, especially when you look at it from the perspective of lay witnesses (potential jurors), and they proceed something like this:

Q: And those x-rays were “normal”, true?

Q: And on exam, Ms. Jones was able to fully extend her neck, true? (He leaves out the forward flexion, by the way).

Q: And that’s a good thing, isn’t it doctor?

Q:  And there was no history of loss of consciousness, was there?

A:  It is a good thing to not be knocked unconscious, yes sir.

Q:  And she did not go to the emergency room straight from the scene, did she?

I believe that the best offense is a fantastic, unstoppable offense.  There is no need to be defensive.  How do you, as a patient advocate, take up for your patients and speak the truth about their injuries without being lead into the land of irrelevancy?

First, you need to recognize this tactic.  This is a bogus tactic that is going to ask you to admit that all kinds of irrelevant BS is somehow good for your patient.  If they start spouting off the exact phrase, “And that is a good thing, isn’t it doctor?”  Red flags should be going up in your mind.

Second, as doctor, DO NOT BE AFRAID TO INTERVENE ON YOUR PATIENT’S BEHALF!  You can do this without being combative.   Let me show you how one outstanding doctor did it recently.

Q:  Doctor, the patient did not go to the emergency room immediately after this wreck, did she?

A:   It does not appear so from my review of the records.

A:  (Doctor looks confused by the question, but acquiesces the first time) Uh… I guess so.

Q:  And it looks like she came to see you 3 days after the collision, true?

Q:  And the fact that she did not go to the doctor the first two days after this collision is a good thing, isn’t it doctor?

A:  Well, I don’t agree with your inference counsel.  First of all, it was not a “good thing” to be involved in this wreck with your client.  Second, it takes at least 4 days to get into my office as I usually am filled up and can’t see a lot of walk-in traffic, so the fact I saw her three days after the wreck means that she must have called my office and needed my services on day one or two.  So, no, it is not a “good thing”.

Inside, I am high five-ing the doctor in my mind, but remaining calm and not flinching on the outside.  The exam continues:

Q:  And doctor during the initial exam you took x-rays, which were normal, true?

A:  Not necessarily, x-rays do not show soft tissue injuries.  Even a dead man will have a normal x-ray, so, counsel, your continued reference to all of these things being a “good thing” is misplaced, in my humble opinion sir.

WHAM!  That is what I call putting in your hand and pulling back a nub.  The insurance defense lawyer quickly stopped his “good thing” BS shenanigans immediately thereafter.  It was beautiful to have a front row seat to the shellacking.

Of course, as the patient’s attorney, I can go back and try to rehabilitate a doctor’s testimony who doesn’t know how to handle this type of insurance lawyer deception, but the much better tactic for you, as the doctor, is to hit it head on like this fellow did when he knocked it out of the park.  And this is not to say that you should be looking to destroy the defense.  But for those of you who choose to act as patient advocates for your patients, learn from this.  Keep this article in your deposition file and review it before your next deposition.  If you do, you will be ready for the insurance defense lawyer and this type of slick trickery, and you can head him off at the pass, and not let him start beating you over the head like a baby seal with these false inferences.