Who Can Be Sued When a Driverless Car Causes an Accident? 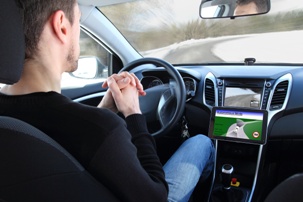 In a world where human error accounts for over 90 percent of the world’s car accidents, automated vehicles could save countless lives and prevent millions of injuries. These so-called “driverless” cars are slowly being introduced into the U.S. market, with many automakers claiming that accidents will drop to unprecedented lows. But this technology is not infallible—and when it fails, it may be difficult to determine who is responsible.

Automation in vehicles isn’t a new phenomenon. Even technology that is now considered “standard,” such as power steering and anti-lock braking, takes partial control of the vehicle away from the driver. Automakers are constantly creating and implementing new ways to take tasks away from the driver, allowing the driver to give more attention to the road. However, the new trend is to relieve the human driver of all tasks, allowing him to essentially act as a passenger in the driver’s seat.

The most recent automated vehicle innovations include:

So who pays for damages when an autonomous vehicle crashes? The truth is that these vehicles make some issues clearer (such as fault), but others more complex (such as legal precedent). Laws regarding autonomous vehicles have not yet been created, making these kinds of accident cases new territory for victims and attorneys.

However, these cases may simply take the form of product liability cases rather than car accident claims, as ultimately the software and hardware included in the vehicle is to blame for the crash. Just as a victim would be able to sue an auto parts manufacturer for a faulty airbag, a victim of a driverless car crash could seek compensation if a computer error caused the accident.

When these accidents happen, victims may be able to seek payment for their injuries from:

Do you think automakers should be liable for actions of their driverless cars? Feel free to share this article on Facebook to see what others think of these vehicles.